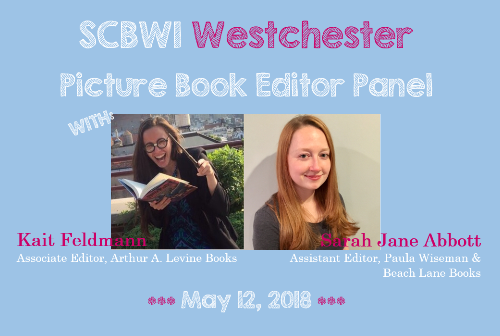 Join Sarah Jane Abbott, Assistant Editor at S&S's Paula Wiseman Books and Beach Lane Books, and Kait Feldmann, Associate Editor at Scholastic's Arthur A. Levine Books, for a panel that will cover all things picture books. Writers and illustrators of all levels welcome! The conversation will be moderated by award-winning picture book writer and illustrator Eric Velasquez.

Kait Feldmann is an Associate Editor at Arthur A. Levine Books, an imprint of Scholastic, where she is building a list of picture books and graphic novels. She joined Scholastic in May of 2014 and gained editorial experience assisting Executive Editors Tracy Mack, Michael di Capua, Cheryl Klein, and Andrea Davis Pinkney. A couple of the titles she worked on include Newbery Honor-winner Echo by Pam Muñoz Ryan and New York Times bestseller The Marvels by Brian Selznick. Kait is a strong advocate for diverse representation and is always looking for meaningful, character-driven stories with humor and heart. Follow her on Twitter @kaitfeldmann.

Eric Velasquez has been illustrating for over 30 years. His first picture book, The Piano Man by Debbie Chocolate, published by Bloomsbury won the Coretta-Scott King/John Steptoe Award for New Talent. In 2010 Eric was awarded an NAACP Image award for his work in Our Children Can Soar, which he collaborated on with 12 notable illustrators of children’s literature. Eric also wrote and illustrated Grandma’s Records and its follow up Grandma’s Gift, which won the 2011 Pura Belpre’ Award for illustration and was also nominated for a 2011 NAACP Image Award. Eric’s latest book, Schomburg: The Man Who Built a Library by Carole Boston Weatherford, has gathered rave reviews, and has also won the 2018 Walter Award from the WNDB organization as well as the SCBWI’s Golden Kite Award. Born in Spanish Harlem and raised in Harlem, Eric lives in New York and teaches book illustration at the Fashion Institute of Technology.