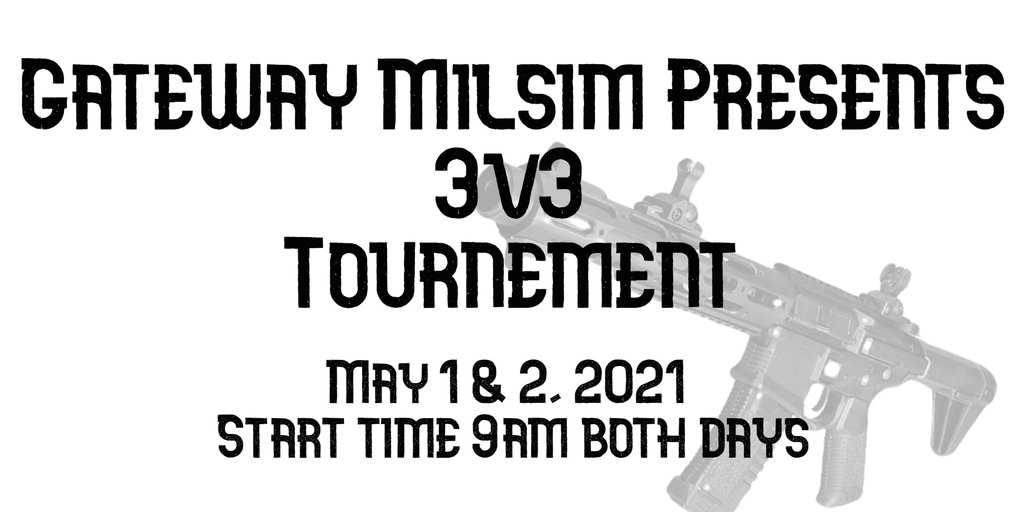 3v3 Fast paced event. Bring your team and get a chance to win a cash prize. $40 a person or $120 a team. Will have vendors and food on site. During down time we will have a full field to play some pick up games. Camping on site and included with the ticket. Any question's for event please reach out to Gateway Milsim.

Each team may only have 3 players in the game each match.

Substitutions are allowed before/after each match. Subs are not allowed during the match, in between rounds

Injury substitutions: if a player is injured during a match, a substitution is allowed. Injured player is not allowed to return to participate in later matches of the same event.

Ringer substitutions are allowed for that event only. Ringer cannot compete on multiple teams at the specific event, must only play for one team. (ringer = non-team member and/or a member of a different team)

Coin toss before each match, winner chooses which side of map for first round

3 Round Matches: Team wins match by winning 2 of the 3 rounds. If one team wins first two rounds, 3rd round is not required.

Team Ready Warning. Verbal and visual ready confirmation by ref with both teams.

Each Round is 3:00 min max time.  At the end of 3 minutes, horn/whistle ends the round and points are calculated.

Teams “breakout” from a starting wall/bunker located at center of Team Spawn point.

Each Team Spawn point is marked 8ft wide, along the starting wall/bunker

One foot must be touching the starting wall/bunker within the 8ft spawn point before round begins.

All guns must be physically touching the spawn wall/bunker within the 8ft until round begins.

All types of guns are allowed

Semi auto only. One trigger pull = One shot (feathering OK)

All guns must have trigger guard

Double/extended triggers are not allowed

3 limit on total number of magazines/shells

Weapons with stocks: stock must be touching arm or shoulder when engaged

After each set, players will be chrono spot-checked per ref discretion. Shooting hot = player is removed from the event, no exceptions. Team plays short one player for the event.

No “surrenders” / No “bang-Bang” kills

Officiators have final call to any disagreement/decision on field

Any bodily contact with a BB is considered a Hit. This includes any part of bodily gear, such as a backpack or camera.

Hits are signaled by players by raising/waving their hand and immediately exiting the field to the nearest deadbox.

Zero verbal communication by dead players upon being hit, leaving the field, and while in the deadbox.

Gun hits do not count.

If opposing players shoot each other at the same time, both players are out.

Dry fires do not count as a hit.

Ricochets do not count as a hit.

FOULS = Not calling your hit, intentional or inadvertent

Three fouls maximum per team, per event.  Individual fouls are held against team.

1st offense: Team loses that round, loses all points for the round.

3rd offense: Team loses that round, loses all points for the round. Player with foul is pulled from rest of the event. The affected team plays one man short for the remaining matches of the event.

4th offense: Team loses the match, eliminated from the tournament.

CHRONO VIOLATION = player with weapon shooting over the FPS/Joule limit is pulled from the event, team plays short for remaining matches.