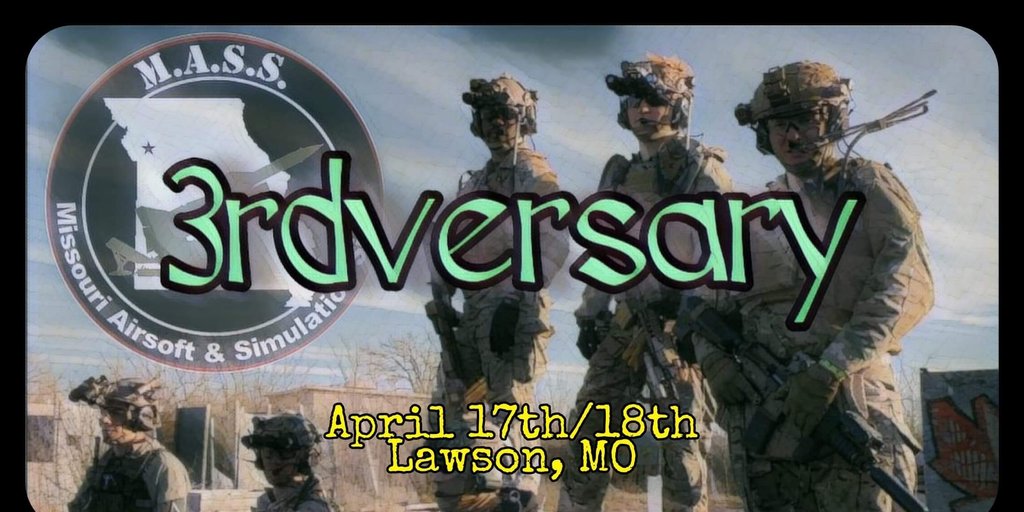 We will be celebrating our 3rd year being open with a 2 day Milsim event.

Long ago, in the beginning of M.A.S.S., there was one true power. A true leader. However, as the player base grew, so did the chaos. At some point it became apparent that action must be taken. The creator of the field decided that dividing his power amongst many would allow for widespread reach and bring peace to the realm. Thus, it was forged!

THE STAFF OF POWER!

The staff’s purpose was to bestow god-like abilities to players and give them control over the rest. These players became known as administrators with only one being supreme to the rest. This new order brought peace as promised and the player base grew tremendously. The staff was being used more frequently as admins came and went. In turn causing its power to wither with overuse. The supreme admin eventually took notice and spoke with the creator of its dwindling abilities. The staff’s power was recharged and all seemed right until it disappeared! The admins were distraught and stricken with fear!

“What’s going to happen now?” they thought. “What of our abilities?”

The disappearance of the staff created a large power vacuum across KC airsoft which lead to dozens of small factions forming causing destruction around them! Eventually one reigned supreme. DoD, led by David Brown conquered the battlefield and formed new syndicate. The Dark BB Mafia. They ruled with merciless brute force! On a certain Sunday, a mysterious note appeared in the store. “The staff shall return on during the third weekend of April. Those who seek it must prove themselves worthy!”

Though the supreme admin tried to keep this a secret, word spread like wildfire. The players knew if Dave and his gang of misfits got ahold of the staff, all hope would be lost. They spread out looking for anyone who would help them. They searched everywhere, North, West, South, but it was to the East that they found their savior. Jake Strum. A Knight from the Order of Airsoft Justice! He took his troops of HITR MilSim and conscripted a formidable force. War plans were set and the Avid Royal Knights prepared. However, the plans were leaked and with the word out nothing could be done. It was too late. It was written, an event, the likes KC has never seen before! Only two possible outcomes. The Knights return stability and order or The Mafias power grows.

Or so they thought...

All Ticket Sales Are Final.