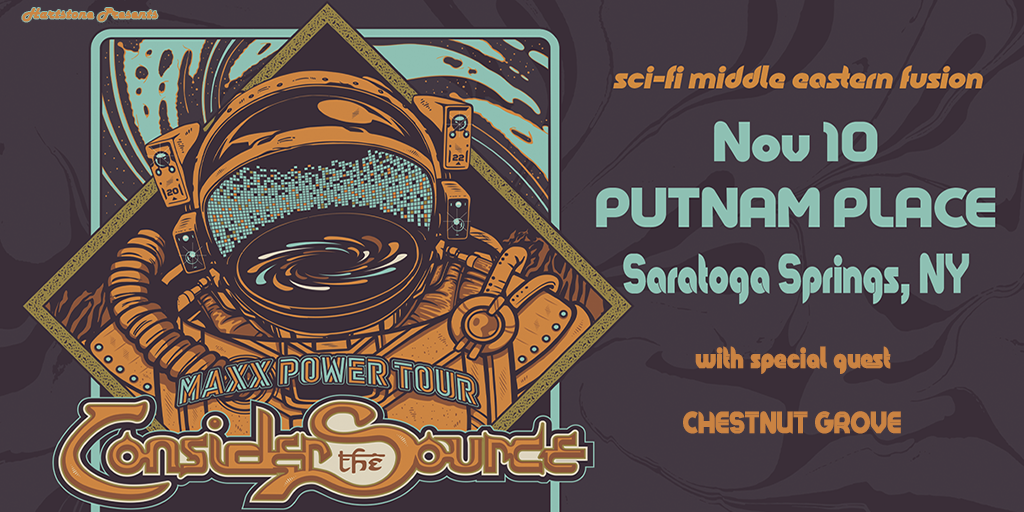 Sci-fi fusion trio Consider the Source defy easy categorization. If intergalactic energy beings, upon their initiation into an order of whirling dervishes, built a pan-dimensional booty-shaking engine powered by psychedelic math…it would sound like a cut-rate CTS cover band. With their blend of progressive rock and improvisatory jazz, soaked in Indian and Middle Eastern styles, CTS blends disparate elements into an utterly original whole. A relentless touring schedule has earned them a fervent following around the world, with fans ranging from tie dye covered hippies to metalheads decked out in black.

Fresh off the heels of a tour of seated performances which highlighted their acoustic instruments and first ever "hybrid" album, the band is ready to get back to the face-melting electric shows they have become known for. Their upcoming Maxx Power Tour will feature material from throughout the band's history, bringing back songs from the very beginning, each album, and a couple of the electric tracks from their latest effort "Hybrid Vol.1: Such As A Mule". Additionally, the band is preparing for the release of their next album in 2023 which they have shared will include "some of the heaviest music we have written yet" and plan to begin weaving into their live shows on this tour.

CTS have performed in a half-dozen countries across three continents. They have shared the stage with a wide variety of artists, including: Victor Wooten, King Crimson Projekt, Wyclef Jean, Ozric Tentacles, Soulive, The Disco Biscuits, Papadosio, Turkuaz, Pigeons Playing Ping Pong, Wayne Krantz, TAUK and many others. They have performed at festivals and events including: Electric Forest, Peach Fest, Gathering of the Vibes, Resonance, Summercamp, Shakori Hills, ProgDay, and Progtober.

Rock 'n' roll band Chestnut Grove formed in 2011 when members Dee, James Daniels, John Tyler, Gary Geers & Zach Winkler were just graduating high school. After four years of playing local bars, coffee shops, theaters, and festivals, the band debuted their first self-produced full-length album “Perkiomenville” in front of a sold-out crowd at World Cafe Live in Philadelphia, PA. In 2016, the band recorded the EP “Let it Down” with critically acclaimed producer Bill Moriarty, who has worked with notable artists like Modest Mouse and Philly's own Dr. Dog. This EP featured a collection of songs including “Whiskey Hand" and “Let it Down,” two of the band's first hits.

The band released the EP “Black Champagne” with Mad Dragon Records in 2018, signed a deal with Nimbleslick Entertainment, and began touring the East Coast and Midwest. Chestnut Grove has headlined venues including the Trocadero, World Cafe Live, and Ardmore Music Hall, while continuing to gain popularity in their home city of Philadelphia and beyond.

In 2019, Chestnut Grove began recording their first full-length studio album when home from touring. In 2020, they released the single “Golden Age,” which received praise from American Songwriter Magazine. The band's ambitions for 2020 had also included completing and releasing the new album and embarking on a US tour–goals ultimately derailed by the global pandemic.

Undeterred, Chestnut Grove went back to the studio with producer Derek Chafin (AKA “Chestnut Grove’s sixth man”) and finished “The Album” featuring singles “Golden Age,” “Ain't Got Nobody,” “Newspaper Hats,” and fan favorite “I Know Somebody.” This album was released in 2021 at Ardmore Music Hall and virtually streamed via Nugs.net, followed by appearances on Radio 104.5 and 88.5 XPN.

Chestnut Grove is back to touring in 2022 with appearances at XPoNential Music Festival, Mile of Music, and more. Stay tuned to hear some of their most ambitious music yet, planned for release in fall 2022.