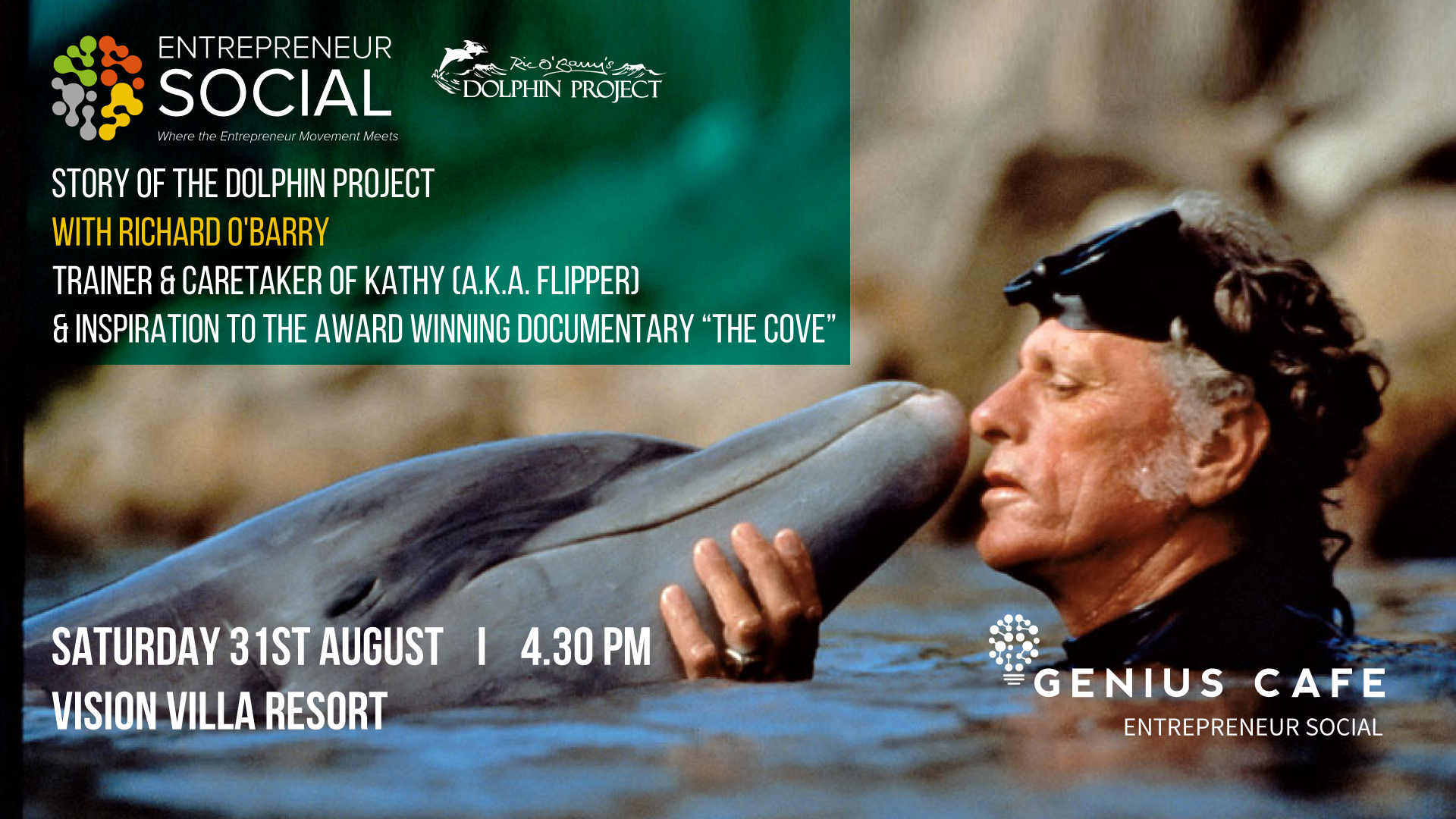 We're really excited to bring our next event to you!

As purpose-driven organisation who are deeply passionate about supporting local businesses and helping them thrive, we thought the best way we could do that would be to start building a community of like-minded individuals who want to build genuine connections and help each other to succeed. Our goal is to empower a global community of social entrepreneurs who are each delivering on the 17 Sustainable Developments Goals in their own unique way.

The event is for anyone who is interested in entrepreneurship and social impact and would like to network in a relaxed social environment with other locally grown professionals and business owners, to share success stories, challenges faced and discuss the strategies that will propel us forward.

This months Entrepreneur Social will showcase Richard (Ric) O'Barry, Founder/ Director of Dolphin Project and the star of the award winning documentary ‘The Cove’.

Over the past 47 years, Ric O’Barry has rescued and rehabilitated dolphins in many countries around the world. He is a leading voice in the fight to end brutal dolphin hunts in Japan, Solomon Islands, Faroe Islands, Indonesia and wherever else they occur.

Prior to a life-altering change of heart, O’Barry himself captured and trained dolphins for the Miami Seaquarium, including the five dolphins who played the role of Flipper in the popular American TV series. Ric has worked on both sides of the captive dolphin issue, for the first 10 years, within the dolphin captivity industry, and for the past 48, against it.

Their most recent success story in Bali was a mission to save dolphins from captivity in a chlorinated hotel pool in Lovina, North Bali. They were forced to interact with paying tourists and perform tricks, according to Dolphin Project, which has been working on a campaign to free them for 10 years. The organization, in conjunction with the Central Jakarta Forestry Department and the Jakarta Animal Aid Network (JAAN), successfully confiscated the two cetaceans and many other animals from the hotel.

Dolphin Project aims to educate the public about captivity and, where feasible to retire and release captive dolphins.

Ric O’Barry is joining us to speak about his 47 years spent with the dolphins, both captive and in the wild and share his documentary 'The Cove' with us and answer any questions you have afterwards with a Q&A session with Ric himself.

We are honoured to host them at Vision Villa Resort for our August Entrepreneur Social.

It is FREE EVENT. Please Register for a free entrance ticket so we can make sure everyone have enough seats available. We also have tickets available with shuttle service from Canggu, Ubud, Sanur.

Please email for RSVP to events@visionvillaresort.com if you have any questions.