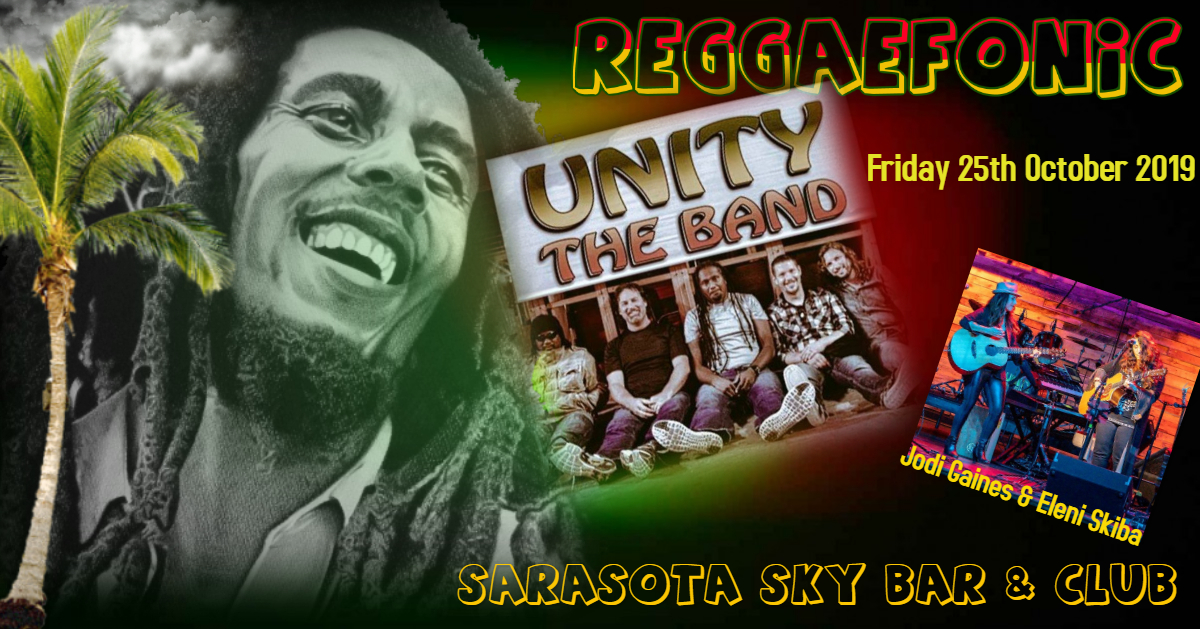 Sarasota! Get ready for REGGAEFONIC, a music extravaganza that builds on the tradition of reggae, with strong accentuated beats infused with the hard-hitting punch of Rock, the smooth, spiritual sounds that are the Blues, the passion of Soul and the rhythmic groove of Funk.

You want to dance? This is the place to be!

Unity the Band is not your average "Reggae" group, but is guaranteed to get you moving on the dance floor. Unity plays everything from reggae, blues, rock and dance covers PLUS original music from their 5 albums.

Unity the Band is an award-winning original roots reggae group based in Wisconsin. Their intense touring schedule of varied venues (300+ per year) around the world has honed an interactive outdoor stage show with positive party vibes and the knack for drawing crowds into the irie groove.

Emerging Americana artist Jodi Gaines, along with guitarist Eleni Skiba, put on an energetic, eclectic, power acoustic show that includes anything from rock, blues, pop, country and more - nothing is off limits. They combine original tunes with interpreted covers to create a live show experience that is just about guaranteed to keep everyone in the audience tapping their toes.

Jodi Gaines is a singer-songwriter and a Florida native known for her soulful sounds that have been compared to Stevie Nicks (so humbling). She tours nationally with her power acoustic duo partner, award-winning Nashville guitarist, Eleni Skiba. Jodi's debut EP Soul Sugar, a genre-bending, deeply personal compilation of soul, folk, rock and country tunes, was released on March 23, 2018. Jodi's first single, Butterflies, a blues ballad featuring guitarist Jake Walden, was released in August 2016. She is working on a set of Singles that will be released throughout 2019.

Eleni Skiba is a seasoned musician with over 35 years of musical experience, and has stepped up with many of the country’s best bands over the years, including American Idol artist Emily Brooke. Eleni's style and energetic rhythm provides anchor and vibe, along with soulful melodic harmonies that perfectly complements Jodi's vocal style.