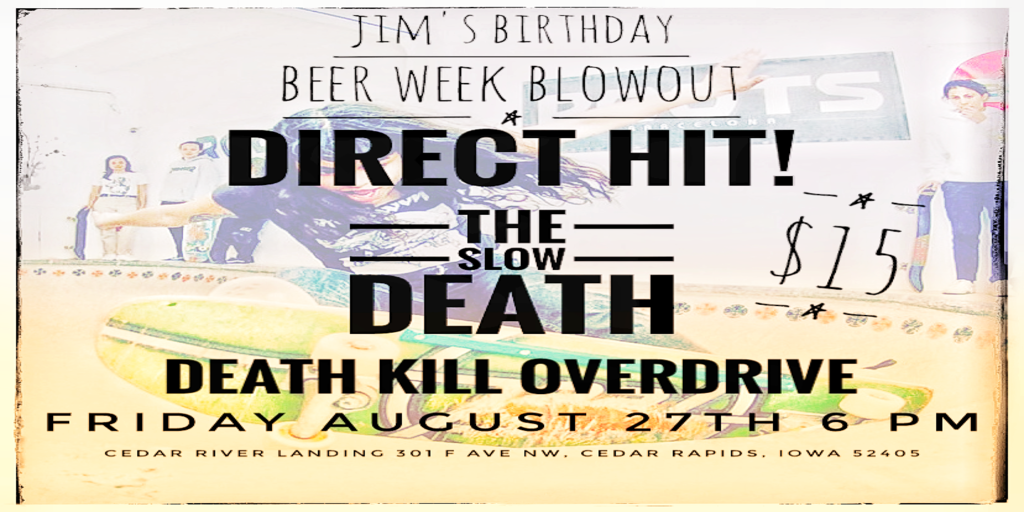 Tickets will be available at the door. $15 cash

Punk Rock and Beers for a great cause!

We are using our Cedar Rapids Craft Beer Week event to raise money for Trees Forever and their replanting efforts in the area. We'll be just over a year removed from the Derecho and still a long way from having enough trees planted to get us back to some sense of normalcy.

Profits from the show will be donated to the organization

A special beer is being brewed for the event and a portion of each sale will also be donated to their replanting efforts.

"Direct Hit! is a band that gives pop punk a better name. The angry vocals of Nick Woods and upbeat sound of the rest of the band outshine the run-of-the-mill bands that have taken over mainstream media . They have managed to create a great equilibrium between hardcore and pop punk" - Punkhouse Press

The Slow Death, fronted by ex-Pretty Boy Thorson & the Falling Angels mouthpiece Jesse Swan Thorson and backed by a rotating cast that includes Falling Angel Dave Strait, Dillinger Four’s Paddy Costello, The Ergs! Mike Yannich, and a slew of others depending on availability any given night. It’s also a natural extension of Pretty Boy Thorson, featuring a confrontational-yet-personal blend of deep-seated emotion and punk fury and frustration. Pretty Boy Thorson directly mined the emotional backdrop of country music while playing gruff-drunk punk. With The Slow Death, it’s honed into the power chord format with more punch and bite atop those lyrical laments.

Iowa City butt rock band featuring Oliver LaFave, Kane Edwards, Molly Enochson, Jeff Keyser. Who have been in 85% of Iowa City bands over the past 10 years. Their recently released album is full of catchy hooks and infectious melodies.

Formed at the beginning of the government-issued mass quarantine as a result of the Covid-19 virus, Cincinnati’s The Mimes found solace in the shut down. As a group of friends living in the same building, as well as sharing a practice space/recording studio, it only made sense for them to utilize their newfound abundance of time together as a creative outlet. What started with simple jam sessions followed with dreams of what an interactive art collective could look like in the current pandemic, eventually turning into a full-fledged album complete with a collection of as many music videos they could make themselves. While each member has always kept a solid root of DIY ethos, their attempts to be as mindful and safe as possible left them no other option but to completely do-it-themselves, offering a uniquely intimate sound and image.

All Ages Rain or Shine