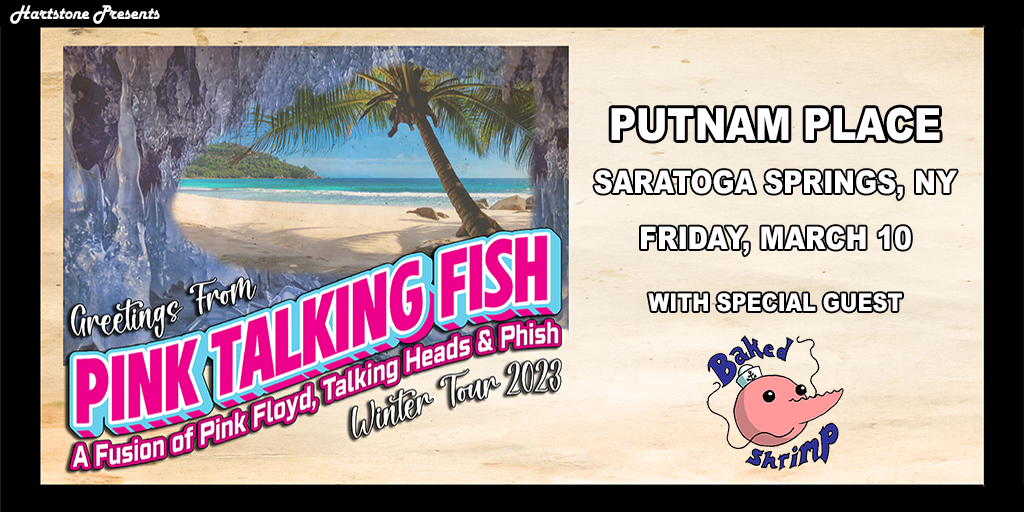 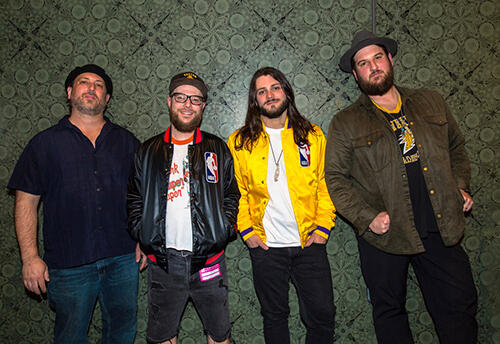 Pink Talking Fish is a Hybrid Tribute Fusion Act that takes the music from three of the world's most beloved bands and creates a special treat for fans of the music.

Pink Floyd, The Talking Heads and Phish are all more than just bands... they are Phenomenons. Their creations have artistically inspired people and their mind-blowing live performances have brought people together to form a special sense of community around the love for their favorite band.

Although the music from each act is different, Pink Talking Fish has discovered that fusing the material together creates an amazing story. The epic emotion of Pink Floyd.... The funky, danceable layerings of The Talking Heads.... The multitude of styles, unique compositional structures and pure fun of Phish.... to merge these three into one gives music lovers a special experience.

Pink Talking Fish features Eric Gould on bass, Richard James on keyboards, Zack Burwick on drums and Cal Kehoe on guitar. This is a band created by musicians who love the music of these acts. It's purpose is to heighten people's passion for this music by creating something fresh and exciting for fans.

Discovering connections is part of the fun: Pink Floyd's "On The Run" seamlessly fitting in the middle of the composition of Phish's "You Enjoy Myself". Perfectly placing Phish's "Sand" into the groove of The Talking Head's "Slippery People". Segued collections from all three acts such as Run Like Hell > Making Flippy Floppy > Piper > Run Like Hell or Mike's Song > Have A Cigar > Once In A Lifetime > Weekapaug Groove. These ideas are the spirit behind Pink Talking Fish.

The story is ever evolving. The experience is always exciting. Come join Pink Talking Fish for the ultimate fusion tribute and celebrate the love of this music in unique fashion. 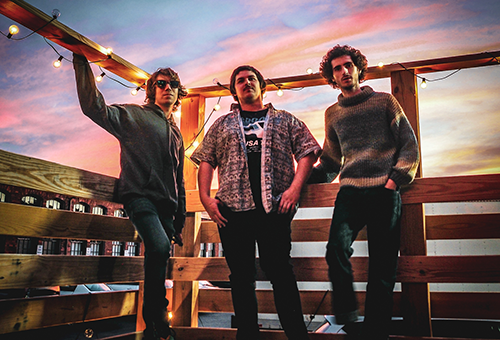 Since forming in 2017, the high-octane power funk trio Baked Shrimp has become a top up-and-coming artist in the festival circuit. The energetic and improvisational young talents of Jared Cowen (Guitar/Vocals), Scott Reill (Bass/Vocals), and Jager Soss (Drums/Vocals) from Long Island, NY have built a catalog of over 150 original songs which they cycle through night after night, making every performance unique from the last. The band is coming off a groundbreaking 2022 in which they performed over 120 concerts covering nearly half the United States, as well as a debut performance in Canada. Baked Shrimp has provided direct support for artists such as the Disco Biscuits, Pink Talking Fish, Aqueous, Mihali (from Twiddle), Kung Fu, Consider the Source, and more. They have welcomed on stage special guests featuring members of Goose, Dopapod, Twiddle, Big Something, Brandon Niederauer Band, and Slightly Stoopid. Baked Shrimp is also quickly climbing higher on major festival lineups including Peach Music Festival, Summer Camp Music Festival, Great South Bay Music Festival, Adirondack Independence Music Festival, Catskill Mountain Jubilee, and even host their own festival in Upstate New York called LonCon.

Baked Shrimp founded LonCon in 2021 following the passing of their most loyal supporter and ambassador, Lon “Conscious” Gellman. The inaugural festival featuring live music, art, and two nights of camping took place in August of 2021 at legendary Arrowhead Ranch in Parksville, NY. After a year off in 2022, the band looks forward to the return of LonCon in 2023.

Despite Baked Shrimp’s very intense touring schedule, the trio has managed to find time to consistently release new music. The band’s 2021 release of Conscious received high praise by media outlets such as LiveForLiveMusic, Grateful Web, The Sound Podcast with Ira Haberman, and more. After a quick release of a three-disc live album The Prawno Tapes, Vol. 1, Baked Shrimp went back into the studio to finish their early-2022 release Pork Etiquette. Pork Etiquette was featured on JamBase’s Release Day Picks which highlighted five other albums, four of which were by Vulfpeck, The Weeknd, Lotus, and Cory Wong. Baked Shrimp celebrated the release of Pork Etiquette with a virtual release party in New York City at Relix Studio. The performance was live streamed on Relix’s Twitch Channel to their 40k followers, and featured The Horn Section (members of Turkuaz). The trio is scheduled to head into the studio once again in early 2023 to lay the groundwork for their fourth studio album.

Baked Shrimp launches into 2023 more prepared than ever to show the music world what they are capable of. Baked Shrimp is constantly turning heads and has moved from “Long Island’s best kept secret” to the hardest working band in the business, a secret impossible to keep.