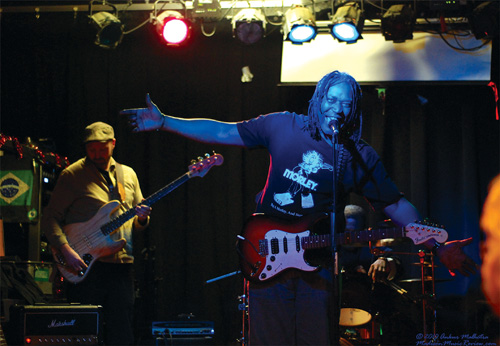 Off the CUFF Venue

From the first note to the last, Pistol Pete will take you on a high energy musical journey. You will want to get out on the dance floor or play "air guitar" right along with him. The consummate professional, Pete tunes up his guitar and then tunes into his audience. Whether he is playing for a small crowd or a large festival, he delivers exactly what the audience wants to hear. He has a large repetoire of cover tunes as well as original material. He is known for his tributes to Jimi Hendrix and considered to be one of the best in the country. Pistol Pete is equally talented in all genres of music; rock, funk, jazz and blues.

Pete has entered and won or placed in the finals in several competitions including; Asti-Spumanti talent search (he appeared on Showtime at The Appollo), The Hendrix Foundation Electric Guitar Competition, Chicago Blues Challenge, Chicago Guitar Slinger, and Guitar Center's King of the Blues.