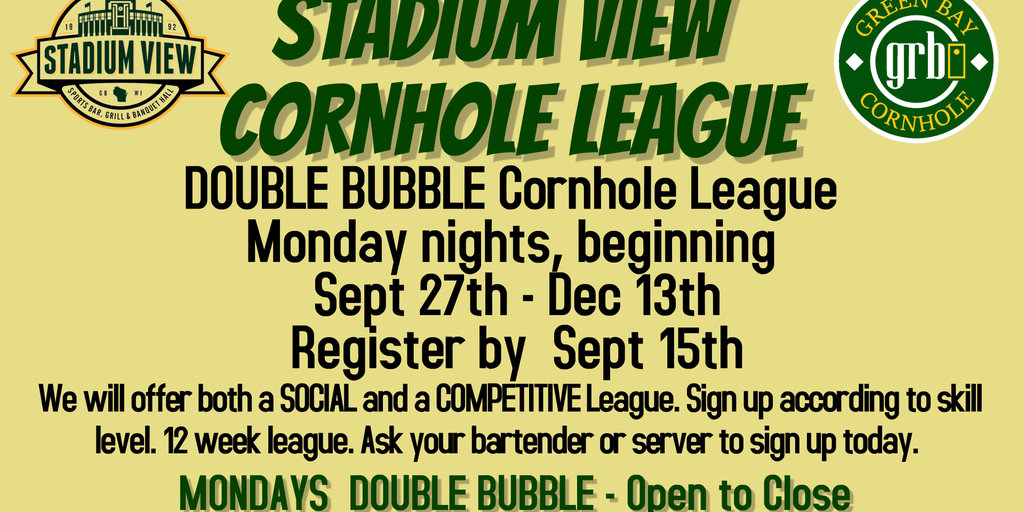 Fall League on Monday Nights Beginning Monday September 27th and running until December 13th. 6pm start time. We will be offering 2 leagues this session, a COMPETITIVE League and a SOCIAL League. Please sign up according to your skill level.

Double Bubble all day & all night. Open to close.

$100 per TEAM of 2 for COMPETITIVE League

CASH PAYOUTS AT END OF SEASON

*Money due at time of Registration

With side game prizes weekly

• You are allowed to use your own bags.

o Winner of coin toss can choose to either throw the first bag OR which lane their team throws in and if desired, the matchup at each end.

• Cancellation scoring is used, each game is a race to 21 points (going over 21 is okay)

o You always finish the round (4 bags from one player on each team) even if someone hits 21 mid-round as points could still be cancelled.

o Scoring is done only after a given round is completed.

• If a bag is touching the ground, it is considered off the board.

• If a bag is hanging in the hole but did not fall through, it is considered 1 point.

o You should try to keep holed bags from stacking up so high that they could prevent other bags from freely falling into hole. In the event a bag hanging in the hole is touching another that has already been holed, you must ask someone not part of the match to carefully clear the bags beneath the hole to see if the hanging bag will fall in.

• Bags must not be picked up while still moving. You may touch/pick up bags 3 seconds after all bags in a given round have been thrown and come to a complete stop.

o If one team wins the first 2 games, the third game does not get played.

o The winning team is to report who won the match to score sheet.

• Teams must alternate shots starting with the team who chose to go first based on result of the coin toss.

• Each player has 20 seconds to throw their bag when it is their turn to go.

• Each team is allowed 2 timeouts (90 seconds each) per match.

• Any bag that hits the ground first and rolls/bounces onto the board is considered dead and is to be removed from the board before the next bag is thrown.

• Any bag that hits the ceiling is considered dead unless it is the first bag that player has thrown to hit the ceiling in that match. In this case, they may re-throw it (you get ONE redo per match).

• Adjusting boards is only to be done after a round is complete.

• After the first game is complete, teams must switch lanes, staying on their end of the court. After the second game and only if a third game is necessary, teams will switch ends but stay in the lane they threw in for game 2.

o Both teams are required to make these moves on the court after each game of a match.