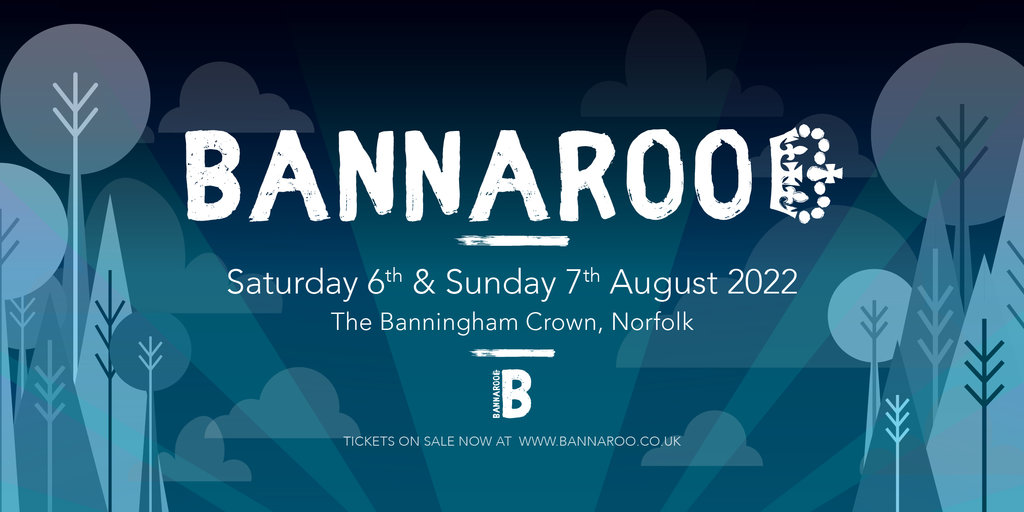 The world is a funny old place at the moment. We're spending more and more time on our own. They say things differently. It isn't the right colour. It's not from this country. He hasn't had a vaccine. She doesn't believe the same thing I do and in all the hum-chum conundrum of our day to day lives, you'd be hard-pressed to say things were easy, but don't worry. That's where we come in. For one weekend, and one weekend only, we invite you to come with us to a very special place. A place where you can be whoever you are, a place where you can bring your sister, your mother-in-law, your eagle (sadly not but we like the idea) and celebrate all the good things about being human without it costing you a bomb.

So - join us, join us, join us you fun-loving feet stompers, for our third annual festival of beautiful music, mouth-watering, reasonably-priced food and drink and of course, a good ol' boogie.

The UK number one tribute to Coldplay.

We are absolutely ecstatic to present for Bannaroo 2022, The world's number one tribute to Coldplay, Ultimate Coldplay.

We're delighted to announce our first headliner for Saturday Ultimate Coldplay - voted 3 years in a row the best tribute in the UK and endorsed by Coldplay themselves!

We don't usually feature reviews but it seems the only way to do these guys justice is to share some of their recent feedback.

"We seen Ultimate Coldplay at Northampton Picturedrome - I have never seen a tribute so accurate. The vocals and dance moves were different level and the way they got the crowd captivated was amazing! Thank you so much for the best occasion. We had the most lovely time! Thank you for letting me be your drunken Beyoncé. Lots of love… Jodie, Lee, Erica, Jon and Shakey Stevens x"

"I saw the band play at the Town Hall in Sutton Coldfield a few days ago. I was there to write a review of the venue and the gig. The venue was lovely, and I have to say I was blown away by the band and the quality of the performance. I will be writing a professional review along with some of the videos I took, but I definitely recommend them and felt like I had been to a Coldplay gig. Really impressed and would definitely go to see them again. There was a great turnout and the atmosphere was fabulous. Well done guys!"

The Worlds' No.1 Tribute to Bon Jovi - Bon Giovi

Bannaroo 2022 will feature arguably the best tribute to any band in the world. Having a massed a quarter of a million facebook followers over 23 years of gigging, their dedication and commitment has only honed their performance into something truly spectacular.

Fronted by new Jon Bon Jovi impersonator Gary Williams, the band have not only toured lengthily around the UK, for clients such as Harley Davidson, Vodafone, Butlins, Chicago Rock Cafes, Yates, Walkabouts, The British Motorcycle Federation and Jack Daniels, but have also performed internationally in and around the Middle East, Russia, Slovenia, Austria, Cyprus, Turkey, Greece, Romania, Holland, Germany, Belgium, Spain, France and Ireland to name but a few.

Bon Giovi were also the only tribute act to be asked to make a guest appearance on the New Jersey tribute album “Garden State Of Mind Vol. 1”, A celebration of Bon Jovi musical career to date.

Covering every aspect of Bon Jovi’s extensive career, BON GIOVI perform all the greatest hits such as ‘Living On A Prayer’, It’s My Life, Wanted Dead or Alive, as well as many others from every album ever produced in one amazing stage show which include all these hits and more, not too mention performing rare tracks that even Bon Jovi haven’t performed for many years.So if you’re ready to ‘Runaway’ on ‘One Wild Night’ down that ‘Lost Highway’ for a taste of the some of the world’s greatest Stadium Anthems, then book BON GIOVI with confidence now! For the closest you’ll get to the Real Thing.

We are absolutely ecstatic to present for Bannaroo 2022 The UK number one tribute to Jeff Lynne's Electric Light Orchestra.

Hailed as the UK's finest tribute to Jeff Lynne’s Electric Light Orchestra! In an all live show featuring soaring strings, striking vocal harmonies and playing all the much loved songs from ELO’s hit-filled library including Mr Blue Sky, Telephone Line and Don’t Bring Me Down.

The ELO Encounter tribute band promises to keep our Saturday afternoon feet tapping with rock, roll and blue skies that would make even Mozart mambo!

Recently remarked by a review board as “Not really a tribute, that cheapens what this band do, but instead transports you all the way back to the era - so sensitively and authentically done that it felt like it was actually ELO being mirrored up there on the stage”.

Formed over a year in lockdown, Norwich-based alt-rock outfit TRUTHTELLER overcame a global pandemic to create fiercely honest, atmospheric music that is as raw as it is refined.

Hailed as Norwich's next big thing, these guys have been absolutely churning out beautifully mastered tracks over the last 12 months and are on the verge of releasing their second EP. Featured heavily on BBC Norfolk's introducing, they've been touted as the next Royal Blood, showcasing gritty-powered vocals against incredible muse-inspired instrumental sounds.

The worlds' number one tribute to Guns N' Roses

We are absolutely ecstatic to present for Bannaroo 2022, The world's number one tribute to Guns N' Roses,

Having played with all 4 members of the original band, Guns II Roses begin establishing themselves in the early 2000's and have quickly become recognised as the best of the best. They've appeared on stage with Slash and Axel and have been endorsed by the official Guns N' Roses HQ as the most talented tribute in the world today.

Now, 10 years on, they have continued to refine their sound and image into the reincarnation we know today. They've appeared at some of the most prestigious venues across the UK, headlined festivals in Los Angeles and have continued to expand their footprint with their recent European tour, selling out shows from Holland to Slovenia and sharing that head-banging magic every little step of the way.

Over the last few years Fleetwood Bac has received rave reviews from ‘The Stage’ newspaper, the U.K.s leading Fleetwood Mac fansites, the official Stevie Nicks website; and from ecstatic audiences wherever the band played, wowing audiences as far afield as Dubai, St. Tropez, the Cayman Islands and Monte Carlo, and twice selling out the world-famous Minack Theatre in Cornwall.

Fleetwood Bac has also been rated by The Times newspaper as one of the U.K.’s top 5 tributes, alongside The Bootleg Beatles, Bjorn Again and the Counterfeit Stones.

The sound, the look, the mystical atmosphere and on-stage chemistry are all portrayed with the passion and energy that got the seal of approval from ‘Big Daddy’ Mick, and built up an excellent reputation amongst Mac fans through numerous tours, festival appearances, corporate events and TV and radio slots all over the U.K. and Europe.

There are tribute bands, and then there are these guys. 'BRUNO - A Tribute to Bruno Mars' are the UK's leading Bruno Mars Tribute, featuring a fully live & choreographed show. Since winning the official title of UK's Number 1 Bruno Mars Tribute for 2 consecutive years, the band have performed at theatres and festivals all over the UK and internationally.

With such a high energy show, the band are sure to get the house rocking every time! Expect to hear smash hits such as 'Locked Out of Heaven,' 'Grenade,' 'Treasure', 'Just The Way You Are', 'When I was Your Man', '24K Magic' and 'Uptown Funk!'

As always our little love cakes, we're not even close to being done with you yet. We've got more (ever so exciting) announcements to roll out to you over the next few months and we can't wait to share the production highs we're going to this year to make your Bannaroo, the most special yet.

Check out our official "Aftermovie" from Bannaroo 2019 below.